Take it, reshape it, reuse it. Facilitate it with friends, family, comrades, in classes, at conferences and gatherings.

Outline of the workshop

Aim: To introduce people to the idea of privilege and the interconnectedness of different liberation movements.

Duration: 1.20h-2.00h (depending on whether or not ice breaker is included and how many people are present)

What you will need:

Click here to view/use the visual presentation accompanying this workshop.

Introduction: Introduce youreself with your pronouns ‘Hi. My name is Aga, my pronouns are she and hers. Thank you all so much for coming’ etc.

A Possibe Safer Space agreement: The facilitator introduces possible guidelines for a safer space. They can be read from the presentation slides (link above). These are used to create a safer space within the current space but it should also be mentioned that people should take these to their meetings and introduce them there. It is very important that the facilitator has a plan of how to deal with people who compromise the safer space. Be prepared to call people in/out when they express something inappropriate. As the facilitator you are also in the position to interrupt any expression that will compromise the safer space, as well as to forbid the person to speak any further. Be also prepared to remove a hateful/hostile/violent person from the room. If they don’t leave voluntarily  it might be useful to coordinate with others before hand who would be willing to play security for this purpose. Another useful tactic could be to leave the room with the whole group, except for the individual(s) who is (are) unsafe. Also, remember that it is never ok to discredit someone who informs you that the safer space has been compromised and having a safer space policy in place does not mean that this place is safe. No space where humans ineract is ever 100% safe for everybody.

Ice breaker Game: This is a bingo game to familiarise the people in the group with one another and make later interactions in the workshop more comfortable. It is very important that the facilitator makes clear that people don’t have to take part (as with every other iteractive part of the workshop). Give them options such as ‘grab a coffee or a snack, or use this as a toilet break if you’d rather not participate’. The game works as follows: Every player receives this bingo sheet (feel free to make your own version) and with it moves along the room to ask other players the questions on the sheet. As soon as the person asked answers ‘yes’, the player writes down their name into the box. You could also invite people to share their pronouns with each other during this exercise. Make sure this is done in a way where you don’t risk putting trans people on the spot and forcing them to share their pronouns (see point 20 of this article on cissexism).  If you are playing with a group where people know one another already, you could suggest to still make sure to tell people their pronouns. This is important because society teaches us to assume people’s genders and their pronouns, which actually makes it weird and perhaps even uncomfortable for someone to tell someone their pronouns. But again, make sure to create an atmosphere where nobody feels like they must share their pronouns, this is not so as to prevent discomfort in cis people but to not make trans folk uncomfortable.

Player A: Hi, my name is Mandy and my pronouns she and hers. ‘Have you ever made Hummus’?

Player A: Did you take the bus today?

Now player A, Mandy asks for player B’s name. Then Player B can ask Mandy questions until she answers ‘yes’. Then they move on to the next person. Only when a player has gone around all other participants can they repeated the round. Once a player has all the boxes filled with names, they shout ‘bingo’ into the room. Here it might be nice if you had a little prize prepared for them. This can be anything, a sticker, a zine, a pack of crisps.

Why Total Liberation: This is a presentation part where the facilitator can simply talk people through the slides. Here it is important for the facilitator to familiarise themselves with the concepts of ‘kyriarchy’, ‘privilege’ and ‘intersectionality’. If you have no idea where to beging, Everyday Feminism is a good place to start looking into these. Two notes on the slides: 1. Intersectionality was coined by Kimberle Crenshaw in 1989 to speak about the lived experiece of working class women of colour, and if you are a white person facilitating this workshop, make sure not to be appropriative of this term but do explain how useful it is to understand how complex our identities are. 2. It is really important that the privilege wheel is very simplistic and basic (but from my experience it serves as a good introduction to the idea of privilege and oppression).

Privilege Exercise: After a short discussion of the privilege wheel the facilitator can chose to include an interactive exercise. This exercise is in a separate prezi which you can find here. The idea is that you read out the sentences on the slides and people indicate if the statemet applies to them. Like the first slide of this prezi indicates, do give a trigger warning as the facilitator. Make sure you let people know that the exercise describes instaces of violence and that they don’t have to participate and should feel free to grab a snack/toilet break at any time if they don’t want to stick around for this. There is a variety of options to facilitate this part. You can ask people to raise their arms, if a statement applies to them. Another option is that people stand up if they feel the statement reflects their lived experiences, or you could have everybody lined up in one row, everytime a statement applies to someone they move forward whilst those who don’t see themselves reflected in a statement move backwards. The main point of this exercise is to make those who are more privileged aware of their privilege and more sensitive to other people’s struggles.

Moving Discussion : This part of the workshop is again interactive, and again it should be pinted out that people are free to chose not to participate. The idea is for you as the facilitatorprepare posters with different kinds of oppressions on them. Spread them across the room and let people move around and share their experiences with these particular oppressions in writing. Beforehand, let everybody know that to feedback to the group you will read them (or some of them) out at the end. When you’ve called everybody back to their seats, read the stateents out and make sure you don’t out anybody, even if you know who wrote what. Feel free to ask ‘would someone like to say a bit more about this?’ and make sure to thank people for sharing often intimate and traumatising experiences.

This is what I write on the posters:

Round Up: Make sure to have a round up in the end. This is you, as the facilitator giving people the opportunity to say somethig they didn’t get to say during the workshop. They can call someone out on something that was said or they can say wat they particularly liked for example.

Here is a video of some parts of this workshop that I ran at the International Animal Rights Conference 2015 in Luxembourg:

Here are some pictures from the results of the workshop: 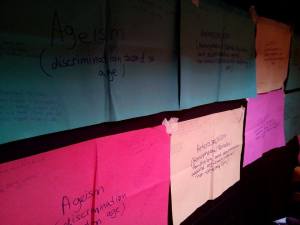 I hope you find this useful and do let me know about ways of improving it.