This is a copy of Kaya’s written contribution to our zine on Human Impacts (transcript below). Thank you Kaya ❤ 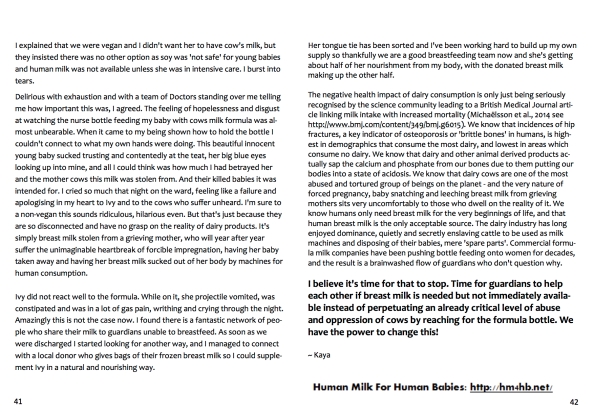 Transcript:
Trigger Warning: Discussion of discrimination against breastfeeders and descriptions of violence towards animals.

Having been vegan and an animal rights activist for 3 years there was never any doubt in my mind that if I were to have a child, they would be brought up vegan and animal conscious also. When I became pregnant at the end of last year I went through a transformative process so unexpected and beautiful; I was suddenly rooted to the ground in a way I hadn’t imagined. This little life inside me was to inherit so much; so much opportunity to make a difference and so much magic the universe has to offer. But also she was to inherit all of the terrible impacts we humans have on our surroundings and the beings we share them with. I promised her I’d do my best to show her the truth of the food, clothing, research and sporting industries and teach her to look through the barrage of lies and propaganda spilling out of a capitalist world that thinks nothing of abusing and destroying for a profit and thinks everything of promoting a brainwashed population that doesn’t realise the monumental violence and suffering in almost every aspect of their consumption.

One of the best gifts I could give this child would be the gift of veganism. To not have been hoodwinked and tricked by society into eating and wearing animals as a child is something that I expect every vegan wishes had been their story. The ‘choice’ that non-vegan parents claim to be promoting is nothing of the sort. By feeding unknowing children and babies animal products we are actually removing all ‘choice’ from the matter. If I had been fully aware and informed as a youngster, I would never have chosen to hurt animals through my diet or fashion or entertainment. But I did, and I regret every mouthful, every leather shoe, every sip of cows’ milk, every ride on a horse’s back. So I promised my unborn child that I would never put her in that position. I would feed her healthy, kind food that had not come from violence. Food that would nourish her body as well as her soul. And that all starts with milk from me, her mum.

When Ivy came into this world, a screaming, magical, hungry friend was delivered to me. We were instantly inseparable and my devotion to her is on a whole new level of carnal depth. The moment she first fed from my breast was unforgettable. It felt so simple and right. My body was producing just what she needed and the joy and love involved in that symbiotic act of feeding kept me on cloud 9. But as instantly as I felt joy I felt an intense sense of pain, fear and guilt. The dairy cows. Women of another species who are forcibly impregnated and their babies taken away from them soon after birth or at most just weeks after their little lives have begun. If male, the babies are either brutally killed or kept chained to a pen and artificially fed to make ‘veal’ (body parts from baby cattle). If female they are subjected to the same sad fate as their mothers – enslaved in the dairy industry. As I looked at little Ivy and felt the intense emotion that connects a parent and their child in an indescribable way, I thought how it would feel to have her forcibly taken away from me. How I would scream and fight and cry, broken at losing the most precious and vulnerable part of me. If anybody has heard the howling bellows of a screaming mother cow who’s just had her baby taken away they will not be in any doubt at the level of terrible despair of these women. Footage of cows trying desperately to reach their missing babies and lunging desperately at enclosure gates is commonplace. That most farmers are men makes it even more chilling. Sexism and patriarchy transcends species.

Ivy and I have had a few bumps in the road when it comes to breastfeeding. She was born with a tongue tie that wasn’t diagnosed until she was a month old, by which time my milk supply had almost disappeared due to her not being able to take enough milk and my body not producing enough in response. I had no idea about any of this and had thought that 6 hour long feeding stretches and constant screaming was normal for a newborn. Eventually she was admitted to hospital and the paediatric team there said she was putting on weight ‘dangerously slowly’ and she needed supplementing with formula milk. I explained that we were vegan and I didn’t want her to have cow’s milk, but they insisted there was no other option as soy was ‘not safe’ for young babies and human milk was not available unless she was in intensive care. I burst into tears. Delirious with exhaustion and with a team of Doctors standing over me telling me how important this was, I agreed. The feeling of hopelessness and disgust at watching the nurse bottle feeding my baby with cows milk formula was almost unbearable. When it came to my being shown how to hold the bottle I couldn’t connect to what my own hands were doing. This beautiful innocent young baby sucked trusting and contentedly at the teat, her big blue eyes looking up into mine, and all I could think was how much I had betrayed her and the mother cows this milk was stolen from. And their killed babies it was intended for. I cried so much that night on the ward, feeling like a failure and apologising in my heart to Ivy and to the cows who suffer unheard. I’m sure to a non-vegan this sounds ridiculous, hilarious even. But that’s just because they are so disconnected and have no grasp on the reality of dairy products. It’s simply breast milk stolen from a grieving mother, who will year after year suffer the unimaginable heartbreak of forcible impregnation, having her baby taken away and having her breast milk sucked out of her body by machines for human consumption.

Ivy did not react well to the formula. While on it, she projectile vomited, was constipated and was in a lot of gas pain, writhing and crying through the night. Amazingly this is not the case now. I found there is a fantastic network of people who share their milk to guardians unable to breastfeed. As soon as we were discharged I started looking for another way, and I managed to connect with a local donor who gives bags of their frozen breast milk so I could supplement Ivy in a natural and nourishing way. Her tongue tie has been sorted and I’ve been working hard to build up my own supply so thankfully we are a good breastfeeding team now and she’s getting about half of her nourishment from my body, with the donated breast milk making up the other half.

I am so disappointed that the medical team are working within such an oppressive framework where guardians are being pushed into making choices so damaging to them and to the cows and their babies.

The negative health impact of dairy consumption is only just being seriously recognised by the science community leading to a British Medical Journal labelling human consumption of cows milk a ‘myth’. We know that incidences of hip fractures, a key indicator of osteoporosis or ‘brittle bones’ in humans, is highest in demographics that consume the most dairy, and lowest in areas which consume no dairy. We know that dairy and other animal derived products actually sap the calcium and phosphate from our bones due to them putting our bodies into a state of acidosis. We know that dairy cows are one of the most abused and tortured group of beings on the planet – and the very nature of forced pregnancy, baby snatching and leeching breast milk from grieving mothers sits very uncomfortably to those who dwell on the reality of it. We know humans only need breast milk for the very beginnings of life, and that human breast milk is the only acceptable source. The dairy industry has long enjoyed dominance, quietly and secretly enslaving cattle to be used as milk machines and disposing of their babies, mere ‘spare parts’. Commercial formula milk companies have been pushing bottle feeding onto women for decades, and the result is a brainwashed flow of guardians who don’t question why.

I believe it’s time for that to stop. Time for guardians to help each other if breast milk is needed but not immediately available instead of perpetuating an already critical level of abuse and oppression of cows by reaching for the formula bottle. We have the power to change this!