The problematic message shown on this meme of 4 fluffy chicks has been making the rounds on social networking sites amongst animal advocates for the past year or so. It reads: ‘World First! Germany to end the mass slaughter of male chicks in the egg industry!’ (see picture below. Not sure who to credit for it but I think I saw it on Animals Australia first a long time ago). 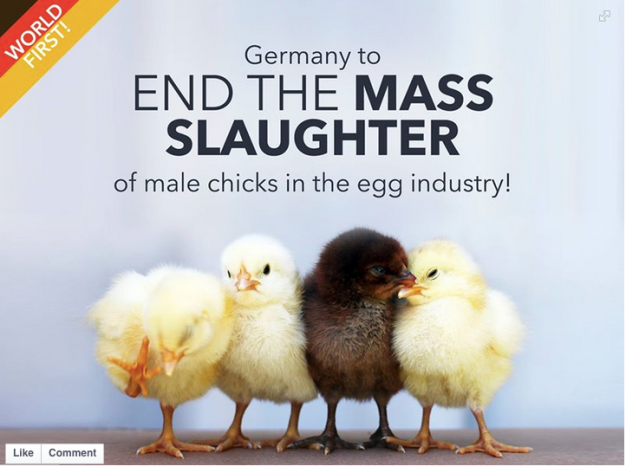 Picture of 4 chicks on light blue background. Top left corner in the colours of the German flag. Text: World First! Germany to end the mass slaughter of male chicks in the egg industry.

Chick Shredding is a thing?

Not only the meat, dairy and egg industries but any for-profit institution that depends on animals will always rely on the exploitability of those assigned female, so as to be able to reproduce the ‘goods’ they provide endlessly, be it flesh, eggs or milk. If you would like to learn more about how exploitative the egg industry is check out animal aid and viva! (the viva link will take you to a video still of a very ill factory farmed chicken) .

Whereas female assigned animals are exploited until they are killed when their reproductive organs give up, male assigned chicks, just as calves, are not profitable, and thus disposed of. Chicks conventionally go through a process called ‘sexing’, where humans decide which animal is male and which female. The male ones are picked out, thrown onto  a conveyor belt that transports them to their brutal death, being shredded or ground up, whilst conscious.

Another option, often used by smaller farms is to either gas the animals, suffocate them by means of a deadly foam, or simply to throw them into rubbish containers.

In Germany the Green Party has been heavily involved in making chick shredding a political topic however their successes don’t have much impact upon individual animals nor onto chicks as a whole. Regulations such as forbidding 1-day old chicks to be killed in one part of Germany (North-Rhine Westphalia) have no impact whatsoever, and if anything just prolong the suffering these animals have to endure, keeping them alive in horrendous conditions for longer.

Now the German government is aiming to implement a technology that allows for the sex­determination of an embryonic chicken. The, amongst the scientific and animal activist community, highly celebrated technology is aimed at reducing the numbers of killed male chickens, by terminating their development during their embryonic stage (Leipzig University 2015). The idea is being developed by Leipzig University veterinarian scientist Prof. Dr. Maria ­Elisabeth Regina Krautwald­ Junghanns.

Let just quickly point out the betrayal by this woman who is, as I will show now, not only advancing capitalism but also misogyny. The whole sexing procedure has not only got misogynist effects but also major cissexist implications. What I find the most perverse about Krautwald Junghanns leading this development however, is that she is a veterinarian, a professional who is trained in the medical care for birds.

The ‘No more chick shredding’ campaign is an attempt to improve the lives of chicks, whilst minimally compromising human gain. That is exactly what animal welfare is about. Welfare legislation changes are often just bureaucratic and the real life impact is so minimal because they are only put into place to keep consumers willing and interested in continuing their relationship with animal products. So animal welfare legislation actually benefits the industry in the long run.

Animal welfare improvements make it very easy for us to forget that it is indeed not normal, natural and necessary (Melanie Joy) to ingest animals. Supporting animal welfare decisions without interrogating their purpose, just as the meme above asks us to do, merely perpetuates speciesism and justifies our participation in animal exploitation.

2 Nationalism and heroism are part of the narrative

The colours of the German flag in the top left corner of the meme are not merely informative, telling us what country passed the law against chick shredding. It also creates so called ‘soft power’ (Joseph Nye) for Germany as a state. The ‘No More Chick Shredding’ campaign by the German government and the international narrative of celebration and victory for the animals surrounding it, positions Germany as a pioneer in science and animal welfare. This invites additional positive international attention and so gives soft power (as opposed to hard economic or military power) to Germany. The meme portrays the country as a hero for the animals: You look at the cute fluffy chicks, see the German flag, read the words ‘Germany to end mass slaughter’ and make a mental note of how good Germans must be if they care about these cuties. This might not be the biggest reason why this meme is problematic, but I feel that even the smallest instances of nationalism are worth to be rejected.

3 Bad for animals good for capitalism

As mentioned above, this campaign is not so much a win for the animals as it is for capitalism and the poultry industry specifically. It actually allows for more efficient mass slaughter, without all the extra costs the useless (that is inedible and thus unprofitable) male assigned chicks bring to the equation with the space and labour demand they create only to be killed. This also means it will be financially viable to increase the exploitation of female assigned chicks.

Veganism is a booming market and animal industries are aware of that. Companies profiting off animals need to keep themselves viable and so invest more into deceptive advertising and lobbying that allows them to spin their products as animal friendly. This ‘end of chick shredding’ campaign is one such example. It is nothing more than a response to increased consumer awareness and a growing dissatisfaction with animal exploitation.

As mentioned above, the idea of embryonic sex determination is harmful and has far reaching consequences for our understanding of gender also amongst humans. I feel that this decision is also partly informed by the mainstream understanding of sex and gender and reproductive organs.

So by ‘sexing’ the chicken eggs we determine which egg is worthy of life (the female assigned one) and which one isn’t (the male assigned one). The worth of the egg then is equal to the exploitation potential the individual that the egg might turn into bears. If that individual turns out to have the right reproductive organs it is deemed valuable and will thus be subjected to a life of torture.

You know how doctors tell pregnant people whether their foetus will be a boy or a girl based on the genitals they can see? The parallel here is that, just like female assigned chickens are exploited for their reproductive organs, people who are commonly assigned female are also reduced to their reproductive organs and whether or not they are existent, functioning and available for men to use. This obviously also perpetuates the cissexist myth that your genitals determine your gender and that there are only two genders. So the sex determination process in animals is not isolated from the myths we learn about assigning genders to humans and vice versa. They both inform and justify each other. This is part of what Carol Adams calls the ‘Sexual Politics of Meat’.