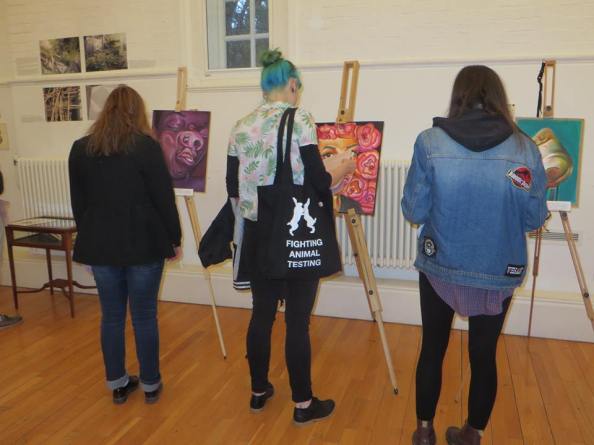 The Cambridge Anti-Speciesist Collective have a discussion group meet up twice a month. Last week, we decided to take a trip to an exhibition at Newnham College called ‘A Revolutionary at Heart’: Experiments in the Female Gaze’. Newnham is a women only college (and was in fact one of the first universities to admit women), and the exhibition is a platform for women and non-binary artists. We were particularly interested as art is traditionally dominated by men, and women and non-binary artists continue to be under-represented in contemporary art.

The male gaze, a term coined by Laura Mulver, describes that the act of looking at different forms of media is predominantly from the perspective of a white, heterosexual man.  An example of this is how images of women are often presented as disconnected body parts (legs, breasts, mouths…) This fragmentation displays women as objects, which encourages viewers to treat women as such. This exhibition intends to subvert this tradition by promoting work by marginalized artists that reject the culture endorsed by the male gaze. 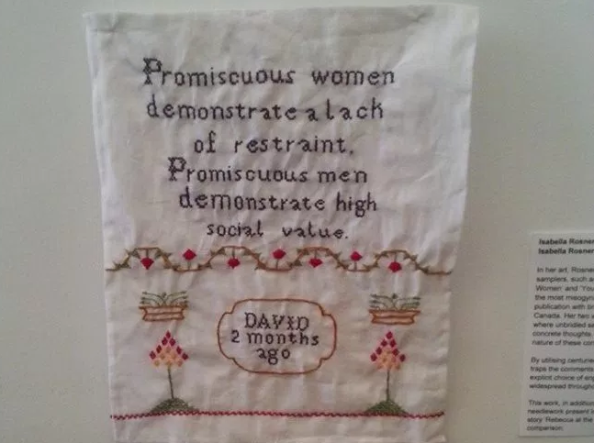 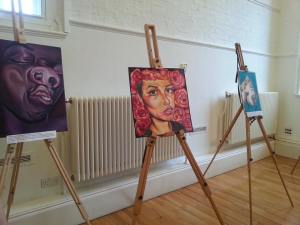 ng. We also enjoyed flicking through the zines displayed – highlights included texts on self-love and care, neuro-diversity and queer culture.

Being in a feminist environment like this – especially a feminist environment that recognises different oppressions  – is very empowering. However, as with many feminist events, I was disheartened that the food served wasn’t completely vegan. There was plenty of fruit which was awesome, but the wine wasn’t vegan, no-one was sure if the bread was, and there were various cheeses served. This upsets me because not only are dairy cows exploited for their reproductive systems (like humans, cows only produce milk when they are pregnant), but because the oppression of animals is so often dismissed by feminists who are working towards dismantling kyriarchy. Animal oppression is part of kyriarchy. Anti-Speciesist Collective is a group that focuses on total liberation – the dismantling of all forms of oppression.

In Sister Species, Lisa Kemmerer observes that ‘some feminists and ecofeminists defend animal-based food offerings at events by arguing that not all who attend are vegan, and that those putting on a conference should not force a particular diet on participants’. Carol J Adams further explains that this insistence of enforced veganism as a restriction of an individual’s autonomy ‘presumes that no one else’s liberty is at issue in food choices’. Serving animal products requires feminists to buy and consume animals and endorses ‘the literal traffic in animals: the production, transportation, slaughter and packaging of animals’ bodies.’ Animals are denied autonomy and liberty in favour of humans choosing to consume animal flesh and products. Of course, the ‘choice’ to consume these products must also be examined as we are socially conditioned to view eating meat, dairy and eggs as normal from a young age, and often not supplied with all the facts or a chance to opt out. For more information about this, check out Dr. Melanie Joy’s work on carnism.

Vegans, like feminists, have been criticised for representing and benefiting the white middle class. The portrayal of veganism in mainstream media often reflects this, and fuels criticism that vegan food at events and conferences erases cultural food traditions. In ‘Social Justice Beliefs and Addiction to Uncompassionate Consumption’, A. Breeze Harper acknowledges that environmental racism, financial stability and food connections to ethnic solidarity contribute to people of colour avoiding veganism and eco-sustainability. Harper argues that ‘health and consumption practices (food as well as nondietary) are frequently contradictory to our social justice beliefs’, and invites readers to explore whether their consumption choices match up to their stance against oppression.

The food served at the event was traditional British snack food (cheese, bread and fruit) which can be easily swapped for vegan, cruelty-free versions at varying prices. In fact, without the cheese and wine, and a double check to find vegan bread, the food could have been completely vegan. There are also plenty of local vegan business in the area that provide vegan food (Food by Lizzi, The Rocking Raw Chef and Gourmet Vegan. The first two are run by women, Lizzi and Barbara, the third by a woman named Lina and a man named Guy). Cambridge is a predominantly affluent area – although there is a growing gap between the rich and those living in poverty – but given the reputation of the Cambridge Colleges (which Newnham is connected to), we assume that they are not as constricted by financial barriers and therefore cannot think of a reason why they would not be able to provide cruelty-free food at an event like this.